The holographic label is designed to authenticate and secure documents or products. These labels provide a very effective response to the fight against counterfeiting, which is a threat to many brands in various sectors.

I. The holographic label, an effective tool in the fight against counterfeiting

The CIB (Counterfeiting Intelligence Bureau) calculates that counterfeiting currently accounts for  10% of world trade, or about EUR 320 billion.

Counterfeiting is a real danger to companies that are victims of it because it directly affects their brand image, often leads to a significant financial loss, and can also pose a danger to consumers because for certain products their lives can be directly threatened because of a lack of quality.

The hologram label guarantees a high degree of security, quick and simple authentication and unlimited design possibilities. The complexity and cost of the technology used in its design, often in 3D, makes it difficult to forge and that is its advantage.

A holographic sticker is designed from a multitude of specific layers that constitute its unfalsifiable nature. It authenticates the product. It is essential in the fight against crime, fraud and counterfeiting.

Finally, a security hologram offers the advantage of not being able to be scanned or photographed accurately: it cannot therefore be fraudulently reproduced by current means, which in principle guarantees its inviolability. The difficulty in reproduction gives proof of the authenticity of the product. The label is used as a means of communication and protection of the brand, thus enhancing the company and its brand.

II.   The different hologram technologies and their creation matrix

There are different technologies for security holograms, of varying complexities. The latter are classified according to different types in reference to their optical security level embedded in the label during the matrix creation process. The different hologram classifications are described below:

What are the techniques used?

Resolution (in dpi) depending on type : 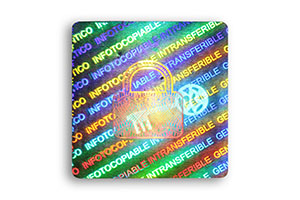 This adhesive hologram is made with a laser beam to carry out an optical recording from a flat illustration. This recording consists of several two dimensional layers (flat) where the holographic images are visually placed one behind the other producing a three dimensional effect on the structure of the hologram. This will allow creation of a visual depth between the different layers and a shiny effect on the first. This hologram is the most common because technology has been extensively developed for over 20 years. This type of hologram is made up of two or more stacked images so that each one is alternately visible from the angle of perspective of the person observing it. 2D/3D holograms (and their illustrations) can be composed of two layers (with foreground and background) or three layers (with background, mid-ground and foreground). The mid-ground is usually superimposed on the background on a two-layer hologram. These images have one or two layers of " floating" flat graphics above or on the hologram surface. 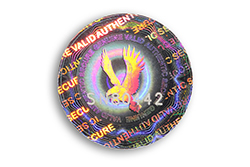 This hologram label has a resolution of maximum 10 microns per optical element, produced on highly specialized machines making counterfeiting expensive and difficult. To design optical elements, several computer algorithms are used to take the form of scattered radiation patterns.

This technique contains a variety of dots which form a structure in relief defined and recorded through the use of a computer control system. This variety of dots diffracts light in the desired directions, resulting in the holographic reconstruction of the images. Thus, a multitude of microscopic dots is generated by the computer to produce a complex structure with diffractingcharacters. These Optical Variable Devices (OVDs) have many uses. Dot Matrix holograms consists of several laser beams with tiny engraved dots where each dot has a unique diffraction network. This security hologram is visually attractive since it can produce a variety of kinetic effects through variable images with a fantastic finish. 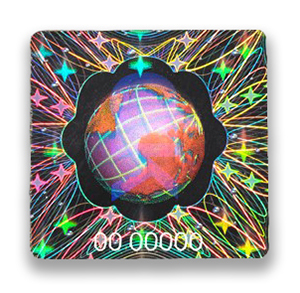 E-beam technology belongs to the most modern and dynamic global microelectronics industry. This technology is based on the synthesis of microrelief with parameters specified by an electron beam focused on locations of nanometric size. This technology is used in products that are applicable in advanced security areas. The technique provides a very high resolution for nanometric features and clear and precise images. E-beam technology creates authentic e-beam synthesized holograms with a high level of security. This technology is the latest in the domain of hologram creation and allows very high resolution for very precise nanometric functionality and imaging. Silicone is the basic material in the production of microprocessors and the same material is used for the design of these holograms, which also marks the beginning of the era of silicone holography.

More specifically, the holograms created by this technology are recorded on silicone surfaces with a perfectly focused electron beam. The instrumentation here is very delicate in its precision for the initial recording of the hologram structure, with a much finer result than when using a laser beam. The electron beam records the structure of the engraved hologram line by line, and the entire recording process is controlled and utilised by a computer system. Once generated, an electron beam hologram (e-beam hologram) has not only all the features of a classical laser hologram but may also contain holographic elements with a much more elaborate design in which it is possible at any time to define visual features hidden in the hologram. These unique features of electron beam holography allow the coding of a large number of very elaborate security elements in the holographic structure.

III .  The different steps in creating a hologram

What is Hologram Master Origination?

To produce an embossed hologram, the hologram origination must first be made. Origination is the term that designates in holography the entire part of the creation of a holographic matrix.  It includes the creation of graphic design, optical recording, the transfer of the optical image onto a medium allowing the industrial duplication of the image.

During origination, an object is recorded on a laser-lit photosensitive plate. An interface is produced by 2 laser beams which is then recorded on the plate.

Once the matrix is created, origination will go through several stages and machines before finishing as a holographic label 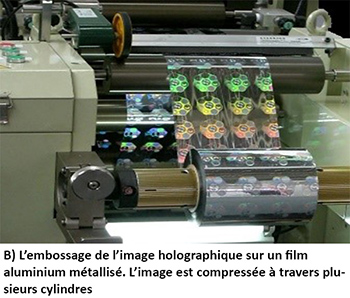 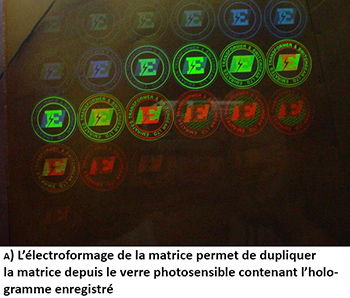 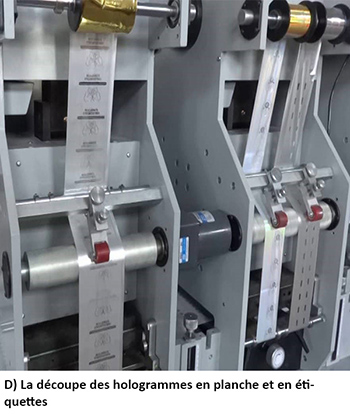 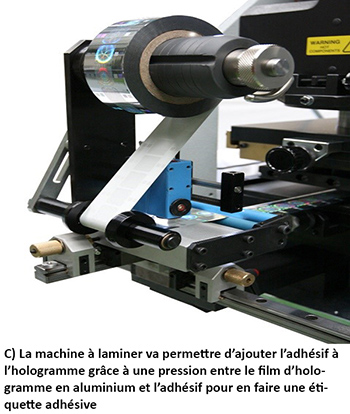